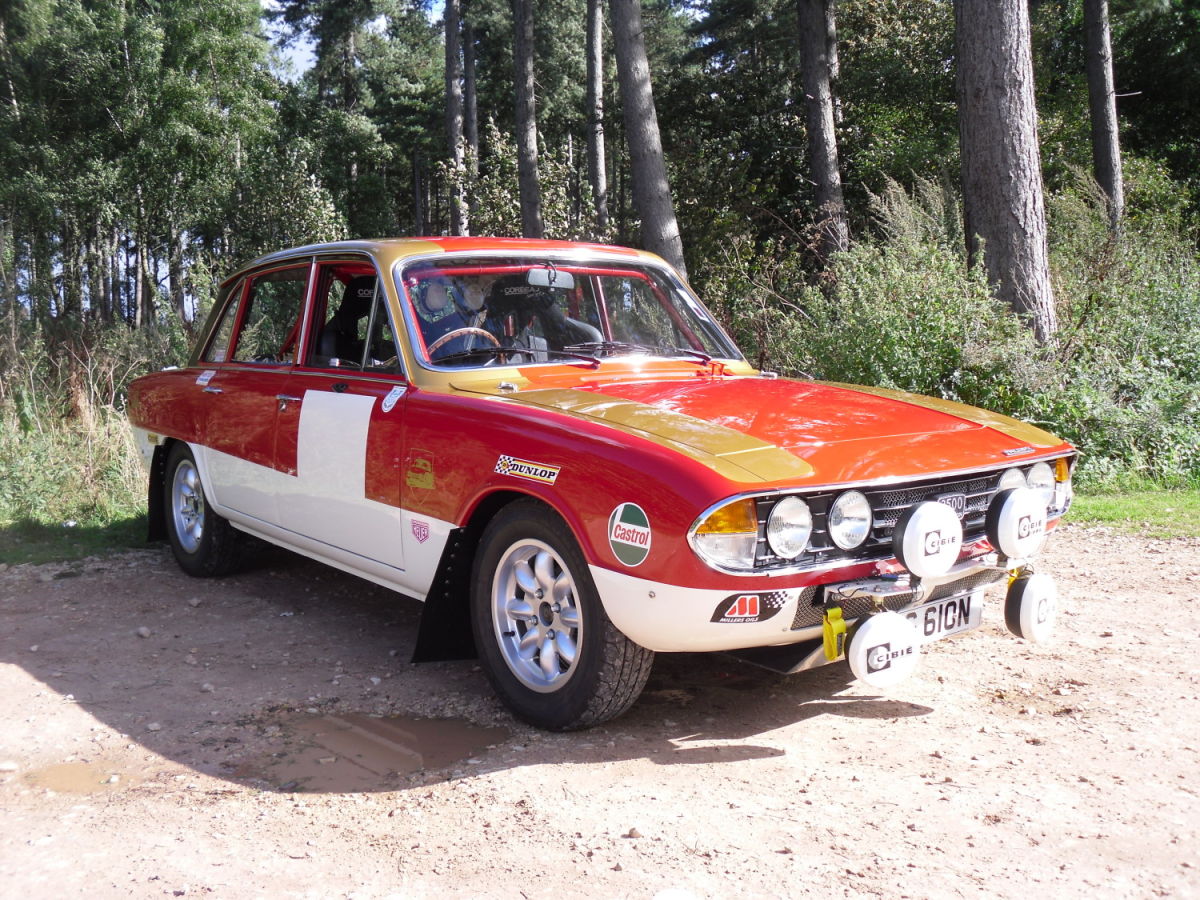 IT’S NOT A REPLICA

When I decided to have a PI Saloon, a rally car hadn’t even entered my mind.  I was just looking for a good shell with little bodywork.  As we all know they are hard to come by now days. After a while one popped up for sale and I bought it.  A jasmine Auto PI Saloon HFG 610N.  I ran it for six months deciding what to do.  The decision was to do a concourse car so I put it  into storage and started to strip it down.  Over 3 months the shell was inspected and accessed.  The drivers door and rear nearside door had gone at the bottom.  Two replacement doors were fitted.  Front and rear wings were repaired as well.  All of the spares were acquired including a set of nos carpets and seat covers. Stag alloy wheels, grill, dash and bumpers etc.

The car was sent to TR Enterprises for the body work to be started.  I can’t do bodywork so I left it with people who could and since they did the body on my 1973 TR6 I knew I was in safe hands.  It was not long before the shell was ready to be stripped down to bare metal and surprisingly it was not in too bad condition.  The rear spring platforms where good and in general the shell was in good condition.  It was sprayed with a 2k Etch primer to stop any further Tin worm taking hold. The body was repaired and ready to be painted, when Thomas Boyd at TR Enterprises asked me to choose a colour and then made a comment in passing “It would look nice if you made it into a Rally car”.

Well that sent the cogs going because I used to do some rallying back in the early 80s in a Grp4 MK 2 Escort. “Leave it with me I said”.  I thought about it and made a phone call to my uncle who was the driver when we did it.  He of course said “Yes please I would like to be your co-driver.” So whilst the car was at a stage where we could go either way the car was prepped to go Historic Stage Rallying.

This meant more work.  At this time I was starting to research on the works cars and a set of Homologation papers was requested from the MSA.  These show how the cars were and the specifications of the cars and what was fitted and approved by the MSA.  So If it’s not in these papers it can’t be fitted unless it is safety oriented.

The shell was strengthened in all of the right places including the fitting of a rear flameproof bulkhead panel where the rear seat was.  Then went off to have a six point roll cage put in.  It went up to Hull to a place called Z Cars.  They were the only company who had the time to do a bespoke Roll cage including fitting.  It had to be made inside the car and pick up the shell in six places.  Six weeks later we picked it up and my heart sank when I saw that a cross brace had been fitted from the driver’s door to the passenger’s door. To me it looked like it would foul the centre consul and would spoil the look I was going for.  It was on the way back to TR Enterprises that the colour was decided Red, white and a gold stripe. The white is Triumph old English white. The Red is a special blend for me and the Gold is British safari gold.

At the body shop it was straight into paint.  First the roll cage was painted red.  Then the interior was painted satin black. White went on first followed by gold and then the red.  A clear coat went on and finally all baked on.  After a week of paint hardening it went in for polishing but not the final cut.  This is because I am a bit known for putting scratches in whist being built.  It was then delivered to my lock up to start to be built up.

First to go on was the rear suspension including the standard diff.  The front was fitted so it could at least be put on the floor and moved around.  At this stage it looked very weird as it was like a 4×4 with no weight on it.  The dash was refitted along with a nos wiring TC loom that I picked up for £15.00, I grant you not a PI loom but it didn’t matter as it was going to be modified anyway.

So I was happy with that.  Whilst I was at home I looked at the standard wiring diagram and drew the wiring diagram of what a Rally car had to be fitted with.  All of the lights, fans and pumps I had on 8 relays and everything had a fuse.  In total there are 14 blade fuses and not the 3 that are standard.  The fuses and relays are all together next to the hand brake.  This is to aid easy access and repair in a hurry.  But that is where 8 weeks of electrical work started.  The Loom was totally stripped back and all the additional wires were fitted and spliced into.  No modifications to the rear loom was required so that was an easy job.

The fitting of a Brantz trip meter and stop watch were fitted to the cubby hole dash but it still can be used.  On the drivers dash all the standard instruments are used with the addition of a start button, large oil light and oil pressure gauge fitted.  The Kenzel clock is still retained.  The center consul is also used with the cross brace just in front of it.  Bit of luck there then.  On the consul there is a MSA battery isolator, fire extinisher release handle and 4 switches.  Fuel pump, radiator fan,interior navigation lights and heated windscreen.  The seats are Corbeau sprint with TRS 5 point harnesses and bolted straight to the floor.

Now the pipework brake lines were next, the fitting of a stag dual circuit master cylinder and servo were in order.  The pipes were neatly fitted in the engine bay and then to the rear of the car through the inside to the rear.  There also was a fire extinisher line from the cylinder in the rear piped to terminals in each foot well and two terminals in the engine bay.  Fuel lines were Motor sport specifications Goodridge solid and flex pipework in JIC -6 from tank to MU.  From the MU there is a take off line back into the co-drivers foot well with a gauge showing fuel pressure.

The Rear end has Stag drums with Quiafe hubs and uprated drive shafts. Wish bones are fitted with Super pro bushes from Chris Witter.  575lbs springs and Spax adjustable dampers.  The Diff has been rebuilt with 4.55:1 Crown wheel and Pinion with a Quiafe Limited slip diff.  The reason I went for the set up with the diff was that we have more acceleration which is what you need in Rallying.  Most of the events that we plan to be doing will be forestry, they are all corners and straights but not too long ones as they are broken up with chicanes.  The J Type gear box has also been rebuilt with Stag internals and heavy duty bearings, the overdrive has a high pressure pump and is still at 25%.

The front end has 160lbs springs with Spax adjustable dampers.  Anti-roll bar and power steering has also been fitted.  The Brakes are Stag solid discs with Mintex 1155 or 1166 pads depending on what event we are running.  All Super pro bushed from Chris Witter.  The drag struts have had the strengthen plates welded on and bottom arms have the new adjustable castor bushes on and set up at 0°.   The sump guard has been made from aircraft grade aluminium 6mm plate and covers the whole underneath and the gear box has one fitted all the way back to the gearbox cross member. The Turret tops have a strut brace as per world cup cars.  The lights are the new type H4s and for the night sections there are 4 1980s Cibie Oscar+ Spots, drive or fog lights all running at 100w.  The Grill has been protected by wire mesh to stop holes appearing in my radiator or oil cooler, not good at a stage start.

The 6 3 1 exhaust is from Chris Witter with exhaust wrap to keep the heat down.  The radiator has been re-cored and it has a 14” Revotec blower fan in front of it.  There is also a crank case breather next to the radiator which the breather pipe comes out from where the fuel pump is on a TC engine. This has been made by myself and took a weekend to do and get right.  It is made from a TR6 coolant pipe.

The wheels are 5 ½” by 15 Minilites 6 Tarmac Kahumo 185/70/15 and for Forest and for gravel events we will use Dunlop SP82 175/70/15, making a total of 12 wheels.  I’m pretty sure that I will be needing 2 sets per event making a total of 24 tyres but that depends on the event conditions.  The 12 will do me for now.  I will be carrying 2 spare tyres as they are directional.  Everyone that is doing the Historic side has to run 70 profile tyres and there isn’t many manufactures that do this profile so we are all in the same boat.

The car was MOTed, taxed and put on the road.  The engine was run in over the weekend and back to TR Enterprises for the head Torque and oil change.  At every opportunity I put some more miles on the clock and before Christmas we took it to Blyton Race Circuit to do its first shake down.  I was very impressed for what it did over the day straight out of the box.  A few suspension tweaks were made and topped up with petrol and out we went again.  The engine was very smooth and great acceleration all the way up to 5500 RPM.  A bit of body roll but that’s the car anyway and I was very pleased with the way it was set up and the way it handled.  Not too chuffed about the fuel consumption 6 mile per gallon but I was told that was good in anger.